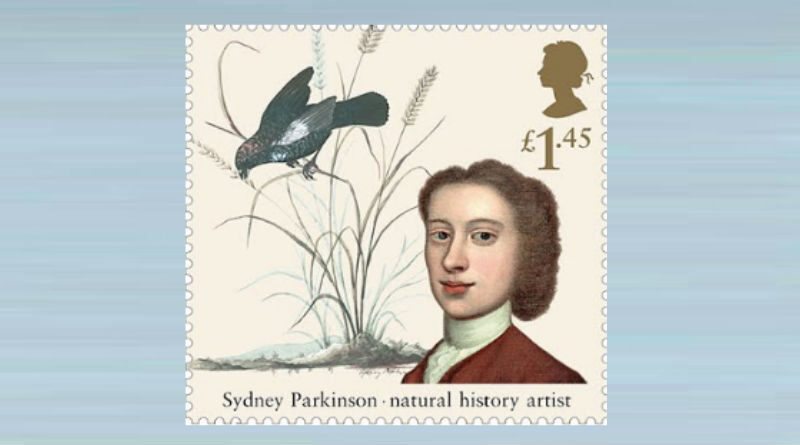 The Postage Stamp of Sydney Parkinson, issued in 2018, marks the 250th anniversary of Captain Cook’s most famous voyage.

The voyage of discovery was a sailing expedition aboard HMS Endeavour in 1768. Cook and his crew were the first to make European contact with Eastern Australia, map New Zealand and accurately observe the transit of Venus.

On the ship were 100 men including astronomers, artists and scientists. Among them was the Scottish Quaker and botanical artist Sydney Parkinson (c. 1745 – 1771).

Many Quakers from the 17th to 19th-centuries were drawn towards the natural sciences and botany, the study of plants, because they did not require a university degree. Being a Quaker at this time in history meant they were often barred from accessing a higher education and so many of those with with a scientific interest found themselves working in the natural sciences where a degree wasn’t always necessary.

Also, botany fitted well with many Quaker principles. Curiosity and a care for the natural world, as well as building a knowledge of plants and their medicinal qualities, meant Friends were drawn to the forefront of this new science.

Parkinson, began his career by drawing plants in London. The Quaker scientist John Fothergill recommended Parkinson to join Captain Cook’s crew as one of two illustrators who would draw the plants they found on the voyage. Unfortunately, the other illustrator died during the early stages of the voyage and it fell to Parkinson to do all the work by himself.

In total, the voyage lasted three years and Parkinson sketched over 900 specimens and painted nearly 300 illustration of plants that had never been seen before in Europe. He also wrote a journal entitled, A Journal of a Voyage to the South Seas, in his Majesty’s Ship the Endeavour.

On the return leg of the voyage, HMS Endeavour stopped at Jakarta for repairs and many of the crew fell ill. Parkinson was one of them and he died and was buried at sea. His journal, however, survived the journey and was given to the British Museum.

The Spread Of Botanical Knowledge

The network of Friends across Britain and the New World meant that there many links in building the knowledge of botany. Recording and classifying plants came as natural skills to the highly organised Society of Friends. Also, wealthier Quakers were able to fund Friends who needed to travel in order to further their research.

An example of the Quaker botanical network in action is when William Penn, founder of Pennsylvania, transported several trees from Britian to his garden in order to grow them alongside existing indigenous trees. These included fruit trees and nut trees such as walnut and hazlenut.

The idea was to encourage the planning of, in his words “a green country town.” Most houses that were built in Penn’s new settlement included a plot of land that had space for a small orchard.  As a result many streets were named after trees such as Chestnut, Mulberry and Vine, which still survive today.

In 1787, the Quaker William Curtis started the Botanical Magazine, which is still in existence today. The magazine was designed to educate and inform both those in the field and the general public on new discoveries.

Teaching about the natural world and environmental concerns became an area the Quakers became experts in. Curtis created a botanical garden in Lambeth, London, and other botanic gardens founded by Friends sprang up in Britain and America.

Other notable Friends that worked botany include the illustrators William Bartram (1739 – 1823) and William Weston Young (1776 – 1847). Also there is Graceanna Lewis (1821 – 1912) who drew 50 water colour representations of leaves in Pennsylvania, which won national recognition.

The postage stamp of Sydney Parkinson was one of six in a set issued by Royal Mail to commemorate the 25oth anniversary of Captain Cook’s voyage.

"Be patterns, be examples."
- George Fox-

May 12, 2021May 12, 2021 admin 0
We use cookies on our website to give you the most relevant experience by remembering your preferences and repeat visits. By clicking “Accept”, you consent to the use of ALL the cookies.
Cookie settingsACCEPT
Manage consent

This website uses cookies to improve your experience while you navigate through the website. Out of these, the cookies that are categorized as necessary are stored on your browser as they are essential for the working of basic functionalities of the website. We also use third-party cookies that help us analyze and understand how you use this website. These cookies will be stored in your browser only with your consent. You also have the option to opt-out of these cookies. But opting out of some of these cookies may affect your browsing experience.
Necessary Always Enabled

Any cookies that may not be particularly necessary for the website to function and is used specifically to collect user personal data via analytics, ads, other embedded contents are termed as non-necessary cookies. It is mandatory to procure user consent prior to running these cookies on your website.